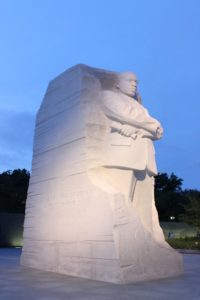 My wife Renee & I are in Washington, DC with who knows how many other people as part of the National Council of Churches “A.C.T. Now to End Racism” rally. (http://rally2endracism.org/).

I became aware of this through an invitation from our SC Synod Bishop Herman Yoos. This will be the second rally I’ve participated in in my life; introverts aren’t big on crowds and demonstrative displays. But on the 50th Anniversary of the assassination of the Rev. Dr. Martin Luther King, Jr. I am glad to give this small witness to the work he and so many others accomplished, and honestly assess the work yet to be done.

(As an FYI, I make it an almost annual practice to read Dr. King’s “Letter from a Birmingham Jail” because I stand convicted by his words and want to do better. If you haven’t ever read it, I would encourage you to do so. https://web.cn.edu/kwheeler/documents/Letter_ Birmingham_Jail.pdf)

During seminary for one of my “Model Mentor Papers” I had the chance to speak by phone with Lutheran Pastor Robert Graetz. He, along with his wife Jeannie, supported the Montgomery Bus Boycott, marched with Dr. King and had the courage to stand up even when he and his family’s life was threatened (https://www.biography.com/people/robertgraetz-21397007). I admire their courage.

At my last call I was moved when I discovered that parishioner Ken Reinhardt had been one of two high school students to befriend Elizabeth Eckford of the “Little Rock Nine” (https://lowellmilkencenter.org/ken-reinhardt/). Ken credited his father for teaching him that all of God’s children are beloved.

And each summer when I go to Campfirmation I meet up with a few colleagues who were classmates and friends of Rev. Clementa Pinckney, the deceased Pastor of Emanuel AME Church in Charleston, SC. He, along with eight others, were murdered during a Bible Study simply because they were African American.

My life has been touched and shaped by so many others, and continues to be. I would welcome the experience to sit down with you, hear your story, and see where God may be calling us forward in the ministry of reconciliation.